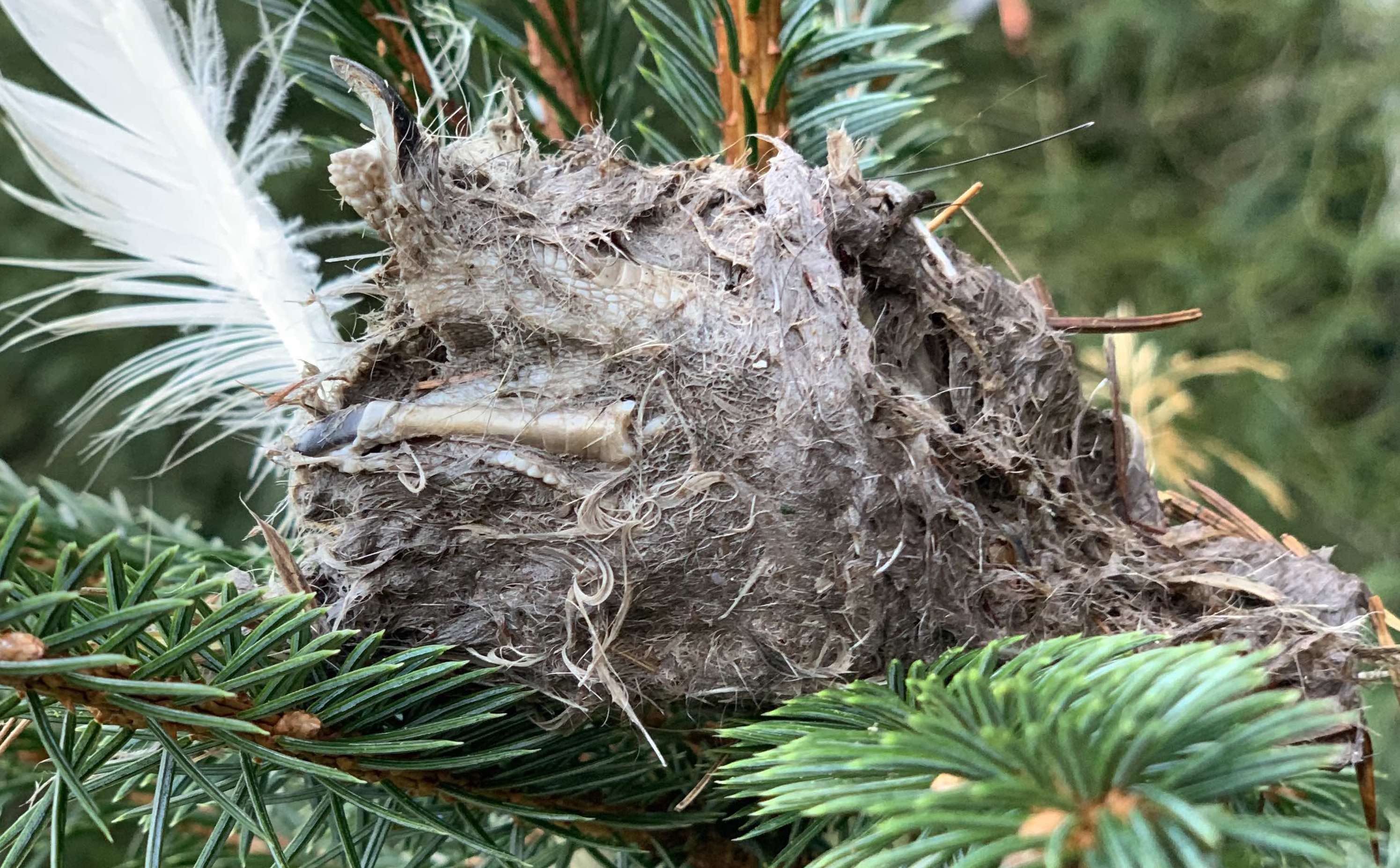 Sea eagles eat geese.
Could they be a crofter’s friend?

Look closely in the image above and you will see the webbed foot of a goose peeking through a large, feathery pellet that belongs to a white-tailed eagle.

Recently, a nest analysis was carried out here in the forest by Robin Reid, RSPB. Robin has been studying prey remains of white-tailed eagle nests for over ten years and his journey has taken him right across Scotland. This location is the only nest where camera footage also exists to show various prey items taken during the raising of a white-tailed eagle chick.

What didn’t show up during the nest analysis that we recorded in footage of the nest included; a number of flounder and young gosling, eel, squid, other fish sp, rodents and puffin.

Nest analysis has a bias towards larger species where remains can be found once the eaglet has fledged. Smaller items such as nestling birds and fish are underrepresented in this type of analysis as their remains are often largely digested or easily broken down. 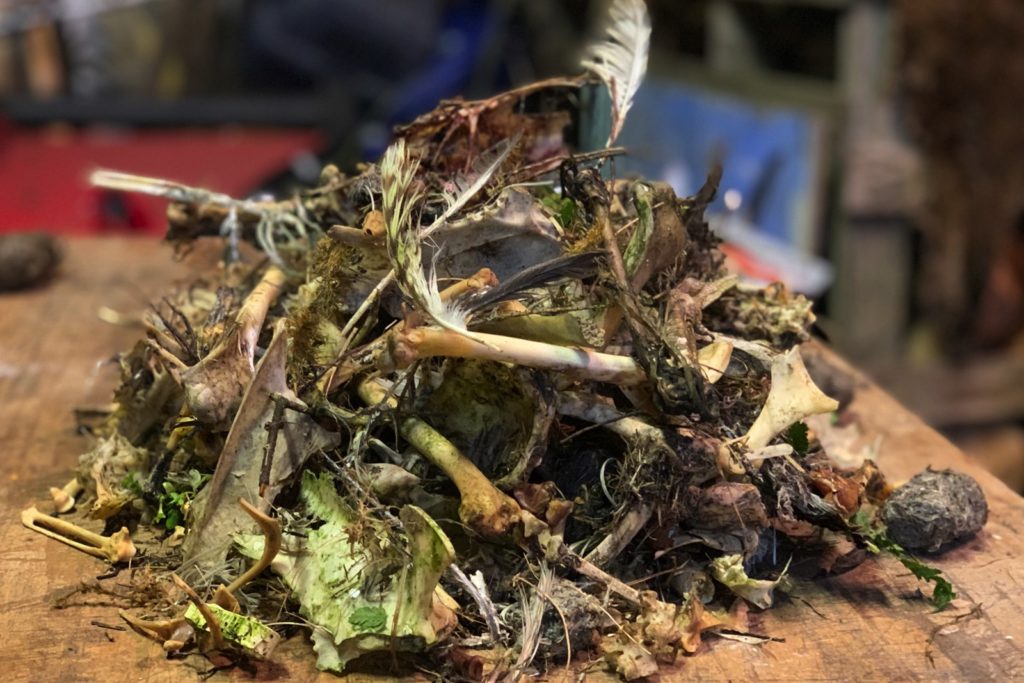 Image: prey remains, collected at the nest of a white-tailed eagle

Eagles taking lambs is a story that has made sensationalist headlines each spring for many years. The contrast of an apex predator that is also the largest bird in the UK, taking helpless newborn lambs, a symbol of spring and new beginnings, appears to have great headline grabbing potential for the media. I grew up on a croft where we kept sheep and cattle and both Angus and I have close family members who still keep sheep today. We continue to live on an island that retains a strong tradition in crofting, with lambs being plentiful in many townships within 10km of the forest. We do not intend to take any particular position on what can be a controversial subject, all we can do is say what we have witnessed.

These eagles have chosen natural prey, in particular geese, over non-natural prey such as lambs.

These eagles have ready access to open coastal habitat including intertidal hunting ground that is rich in biodiversity and natural prey.  What we have seen is that white-tailed eagles have a broad diet including fish, mammals and birds. We also know that whilst they are skilful predators, they are also opportunists, scavenging after otters and pirating prey from other species as well as hunting. Another favoured prey item appeared to be flounder, we also witnessed items such as squid and eel that may have been pirated. Interestingly, we became aware of a number of reported goslings being discovered, ‘wandering’ astray from from their nests nearby, around the time that we were seeing adult geese being taken. Aside from the direct impact of taking an adult goose there may have been cases of abandoned nests too.

Seen as a potential threat to crofting practices, in particular to the machair area of Uist, there is evidence that numbers of greylag geese are increasing and are causing a significant amount of damage to crops and grazing that crofters rely on to raise their livestock.

Like most birds, geese are protected from hunting between the 01st February and the 31st August, though licences can be granted. Could the white-tailed eagle be the natural way to predate geese, particularly during these closed months?

Even if they take relatively few geese in the context of the Uist goose population, the eagle’s presence is likely to move the geese around much more between feeding areas and to seek refuge, this is likely to reduce the agricultural damage caused by them. Crofters can put a lot of time and effort into scaring geese, pushing them away from crops. White-tailed eagles could now be helping with this job.

What about the ear tag? The tag itself was seen to be an old, worn ear tag and presumed to be from an older sheep. You can see the tag in the image of prey items below. Lambs are not tagged during their early months. White-tailed eagles are by nature carrion feeders, perhaps the tag was from a fallen sheep on the hill. It is not uncommon to come across fallen sheep or indeed lambs whilst out walking, not every carcass gets buried. We even found a sheep carcass on the beach just recently.

The most unusual item? A fishing lure…. with quite a lethal hook on each end. How this got there is also a mystery. It’s interesting it made its way as far as the nest but fortunately not swallowed. 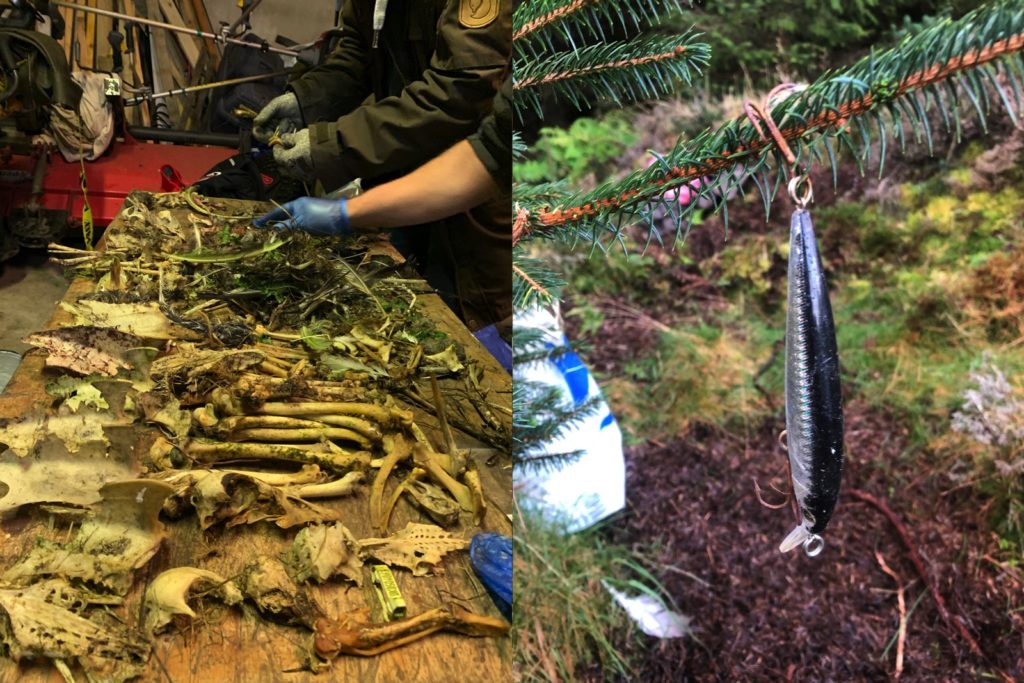 Assuming the eagles nest successfully again in 2020, a research project, facilitated by SNH, will inspect this nest in more detail. The footage will be thoroughly analysed by a specialist researcher to determine more about a sea eagle diet that is not possible when carrying out only a nest analysis. A nest prey analysis will also be repeated and it is hoped that the combined approach of very focused and detailed camera work at a few sites and the results from prey remains analysis across Scotland will increase our understanding of white-tailed eagle feeding habits. More news on this to follow soon…

The Outer Hebrides are fortunate to still be holding on to much of the natural habitat here and there are many great examples of how humans can and do live alongside nature. Now more than ever, it is becoming widely known and accepted that our biodiversity is crucial to the health of our planet and ultimately, to us.

Perhaps soon the media may start to celebrate our native biodiversity and champion Scotland as a place that welcomes wildlife in all its forms, whilst understanding the valuable role that apex predators have in our ecosystem. Assisting with the natural control and movement of an expanding goose population may be an aspect of the re-introduction of our native white-tailed eagle that can be welcomed and perhaps seen as a positive contribution to the crofting landscape.

With thanks to Robin Reid (RSPB) & Jamie Boyle (RSPB) for sharing the discoveries and details with us as they analysed the prey remains and also for their contribution to this article.

Find out more about Max the sea eagle and his visit from the bird ringer.

Find out more about our membership with the European Rewilding Network